POUGHKEEPSIE, NY – With the backing of both the Dutchess and Putnam County Committees at today’s GOP Convention in Poughkeepsie, NYS Senator Sue Serino announced that she has been designated as the 2020 Republican candidate for the 41st District.

Senator Sue Serino said, “Serving the residents of the 41st Senate District has been the honor of my lifetime and I am grateful for the voters who have put their trust in me to be their voice. Albany lives in a bubble—out of touch politicians are working overtime to nickel and dime hard-working taxpayers, put criminals ahead of law-abiding citizens, and push through extreme policies that have real impacts on the lives of Hudson Valley residents. Since day one, my goal has always been to put the residents of the 41st Senate District first, and together, we can continue to move our community forward.”

Dutchess County Republican Committee Chairman Michael McCormack said, “Senator Serino has been a voice of reason in the NYS Senate for the people of her district. Having Sue as our Senator in Dutchess County provides the confidence that our residents are truly represented with practical solutions to the complex issues we face as NYS residents. It is without a doubt that Sue is the right person for the job as our voice in Albany. We look forward to having her in Albany again doing the work of the people so very well.”

Putnam County Republican Committee Chairman Anthony Scannapieco said, “Senator Sue Serino has always been the strong, independent leader we need fighting for us and I am proud to stand in support of her candidacy for re-election. Sue has the heart—and the fight—we need to pushback against the extreme policies coming out of Albany every day.”

Staff Sergeant Jennifer Dillon, Town of Poughkeepsie Committee Member and veteran nominated Senator Sue Serino at the Convention, and said, “Senator Serino is a long-time champion for causes that matter most to Hudson Valley residents. Sue knows that every dollar matters to our families and fights tirelessly to oppose tax increases by out-of-touch politicians. She has made our heroes a top priority, leading the fight to successfully secure resources that our veterans need to thrive, and she’s put an unprecedented spotlight on Lyme disease and other tick-borne illnesses endemic to our area. Sue has brought about such positive change in the past five years and we need to keep that forward momentum going!”

Stephen Reverri, First Vice Chair of the Dutchess County GOP, seconded the nomination of Senator Serino and said, “Sue is exactly who we need to keep in Albany. Honest, hard working, accessible, and clear-minded. Sue continuously shows through her actions, she is there for all the right reasons, to represent us.”

Kevin McConville, Executive Assistant to Putnam County Republican Committee Chairman Anthony Scannapieco, also seconded the nomination of Senator Serino, and said, “On behalf of the people of Putnam County, and our Republican Chairman Anthony Scannapieco, it is a privilege and an honor to nominate Senator Sue Serino for re-election to the 41st Senate District. Senator Serino’s leadership and service to others serve as an inspiration to all, especially young girls and boys in the Hudson Valley.  Her commitment to represent seniors, veterans and all of us is exemplary.”

ALBANY, NY (WRGB) –Senator Sue Serino is leading the fight to fund a program that ensures local veterans have access to the resources they need to thrive in their community.

With funding for the Joseph P. Dwyer Veterans Peer-to-Peer Support Program (Vet2Vet) once again left out of the Governor’s Executive Budget Proposal, Senator Serino stood with veterans and a bi-partisan group of lawmakers to call on legislative leaders to fully fund the program in this year’s state budget.

“Vet2Vet saves lives,” said Senator Sue Serino. “That’s reason enough to ensure that it is funded by the state consistently.”

POUGHKEEPSIE, NY—Following the decision by the Dutchess County Republican Party to nominate NYS Senator Sue Serino as their candidate for the 41st Senate District, Senator Serino vowed to continue to stand up and fight to ensure that the voice of the Hudson Valley is heard in Albany.

Senator Sue Serino said, “I have been incredibly honored and humbled to have the opportunity to serve my neighbors as their State Senator. Now, more than ever—with the very real threat of NYC dominated, one-party control looming in Albany—we need independent leaders who are dedicated to ensuring that our community has a voice in the process. I have made it my mission to deliver for our local community and together we can move our community forward and ensure that the values and issues that matter most to Hudson Valley residents are put first.”

Dutchess County Republican Chairman Michael McCormack said, “Sue has a heart of gold and a fighter’s passion for doing what’s right for our local community. She has always put our needs first and has successfully fought for the things that matter most to us, like lower taxes and expanded economic development opportunities. She has brought unprecedented awareness to the Lyme Disease and heroin epidemics that are hurting families across the region, and she has stood up against corruption and proposals that would negatively impact our area. She is the best person to continue representing us, and I am honored to confirm her designation as our candidate for the 41st Senate District.”

Steve Caswell, Chair of the East Fishkill Republican Committee nominated Senator Serino at the Convention which was held in Poughkeepsie. Caswell said, “Sue Serino has contributed much to our communities; as an entrepreneur, small business owner and then in public service. She knows our community and does what is right to make it better. She’s not in this for a paycheck, she’s in it for us, and it shows in all that she has accomplished for our area—from securing funding for Lyme Disease, to grant funding for local community projects, she’s fighting for the things that matter. For as long as I have known her, Sue has always stood up for what’s right and it is my honor and privilege to officially nominate her as the Republican candidate for the 41st Senate District.”

Betsy Maas, Chair of the Union Vale Republican Committee seconded the nomination of Senator Serino, Maas said, “Senator Serino has what it takes to make a difference and to improve quality of life for everyone here in our local community. Her genuine passion for putting people first has been clear throughout her time in office and her work ethic and integrity are second to none. I am proud to help nominate Senator Sue Serino because she has a proven record of effectively advocating for our local community and I know that she will continue to fight tirelessly to ensure that our community can provide the kinds of opportunity our residents need to thrive.” 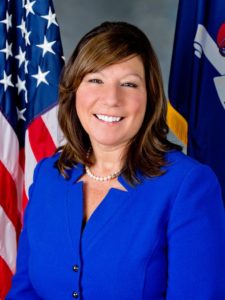 We have all seen the famous ‘I Love NY’ trademark that has been a staple in souvenir stalls across the state since the late 1970s. The ad campaign played a role in bolstering the image of New York City at a time when its economy was lagging and its streets were crime ridden. The goal? Boost morale and tourism to save the City and hope that the positive impact had a ripple effect throughout the state. The logo’s legacy is cemented in the minds not only of New Yorkers, but of tourists from around the world who cannot help but think of it when they think “New York.”

Today, however, with the state more likely to top the list of highest taxed states in the nation instead of fastest growing, the headlines and sentiment have experienced a notable shift from “I Love NY” to “I Leave NY.”

It is clear that New York has an image problem and it is going to take more than flashy television ads touting our ‘open for business’ mantra to fix it. It is time for the state to shift its priorities from flashy gimmicks and contests to a reinvestment in what matters —the individuals and families that make New York great. That’s why with the state budget process underway, I am fighting for policies that invest in in our workforce, our communities, our schools, and the issues that matter to Hudson Valley residents.

Last week, the Senate passed a one-house budget resolution aimed at bolstering affordability, opportunity and security. That plan rejected the $1 billion in new taxes in fees that were proposed by the governor, while investing in the programs that put money back in the pockets of taxpayers and into programs that will open doors for residents.

Our budget proposal shuts down the disastrously under-performing programs like Start-Up NY and redirects the $44.5 million spent on advertising it to support more effective economic development initiatives.

Not only did we reject the executive’s proposed cap on the STAR property tax savings program that many New York residents depend on, we proposed making small businesses eligible for it. Doing so could save New York small businesses an estimated $275 million that they can use to reinvest in their businesses and their employees.

As Aging Committee chair, I know how important it is to ensure that our seniors have access to the resources they need to retire locally. That is why we proposed freezing school property taxes at current levels for many seniors and completely eliminate their school property taxes over the next 10 years. We also proposed increasing the private pension and retirement income exclusion from $20,000 to $40,000 for single taxpayers and to $80,000 for married taxpayers, over three years. This is the first increase since 1981, and represents a change that could potentially save NY retirees approximately $275 million.

High quality schools and post-secondary institutions play a critical role in attracting residents to our communities, and our proposal includes significant funding for education. It provides a record amount of education aid and more than doubles the foundation aid included in the governor’s proposal. Importantly, it also funds critical school safety measures that will help districts provide improved security technology, school resource officers and considers ways to improve the ratio between students and critically necessary mental health professionals. It also restores the potentially devastating cut to a program that helps to provide financial aid for students who attend area private colleges — institutions that not only employ a significant number of our local residents, but are essential to our regional economy.

The Senate’s proposal also includes unprecedented funding to combat the heroin and opioid epidemic and $1.2 million to combat the spread of Lyme and tick-borne diseases, as well as language I personally fought to have included that would represent the first major step toward addressing insurance coverage for those diagnosed with tick-borne diseases.

Sue Serino, R-Hyde Park, represents the 41st state Senate District. She is chair of the Senate Task Force on Lyme and Tick-Borne Diseases and of the Senate Standing Committee on Aging.