Llaverias’ ‘scripted comments’ defense proves to be a lie

Poughkeepsie, October 24… In the wake of new evidence of domestic abuse against County Legislator Giancarlo Llaverias, the Dutchess County Republican Committee called on all public officials and candidates for public office who have not yet called on Llaverias to resign to do so immediately.  This is not a political issue. This is a matter of right and wrong, and this is a time of reckoning for those who want to lead this County.

Once again, there is evidence of Legislator Giancarlo Llaverias (D-Town of Poughkeepsie) admitting to being an “abuser” who became “violent” in his romantic relationships. This is the second time this month that Llaverias was caught flippantly speaking about his history as a domestic abuser. Why does Dutchess County Democratic Chairwoman Sumner stubbornly continue to protect a man who admittedly batters women? Why does she refuse to call out such abhorrent and deviant behavior? Does the safety of women take a back seat to politics? Legislator Black and Legislator Munn have courageously and rightfully called for Llaverias’ resignation. They are doing the right thing, not the political thing. Why can’t Chairwoman Sumner muster the courage to do the same?

In a newly discovered podcast entitled ‘Toxic Relationships,’ published on April 14, 2019, Llaverias discusses his previous relationships in which he abused women. He even went as far to admit that he believed “I was never the issue,” which puts into bizzare context the nonchalant manner in which he referred to beating his former girlfriends. When speaking on the podcast, Llaverias clearly confirms that he himself brutalized women, referring to abusive actions in the first person “I” as well as in the third person “Giancarlo.” He previously claimed that he has never abused anyone and that he was reading a “script” provided to him by somebody else, while declining to produce said script citing “confidentiality.” These latest recordings prove what any rational person already knew: Giancarlo Llaverias is a liar. Those who continue to defend this violent, lying, poor excuse for a man should be ashamed. 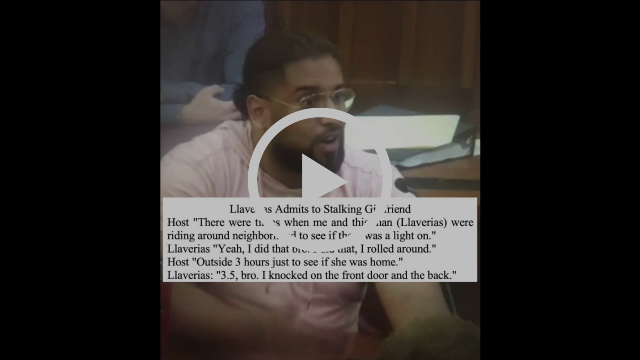